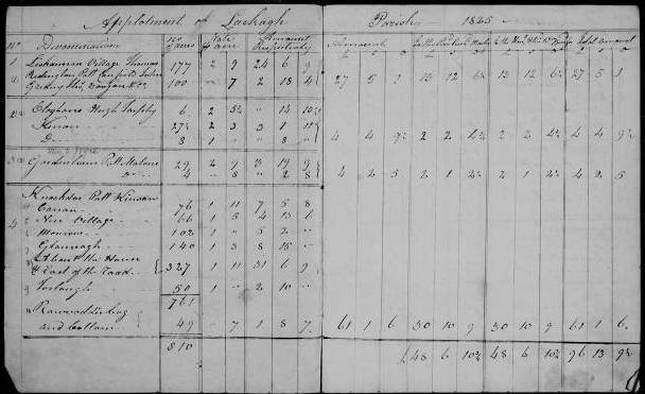 Tithes were a tax on agricultural produce levied by the English Government on Catholics and Protestanrts for the upkeep of the Church of Ireland (the established Church). The parishes used in the Tithe Applotment Books are civil or Church of Ireland parishes, which often differ in name and territory from Catholic parishes.

The Acts of Parliament of 1823 and 1832 paved the way for the tithe applotments. Tithes would now be a fixed charge on land. Furhermore, tithes would be calculated on the basis of the average price of wheat or oats in the parish in the seven years before 1821. Significantly, they also extended the application of tithes to pasture, where previously they had been levied only on tillage.
.
This change necessitated the valuation of individual holdings in almost all parishes containing agricultural land to determine the portion of the tithes for which each occupier of land would be liable. Only productive land was subject to tithe. The apportionment was recorded for each Church of Ireland parish in a Tithe Composition Applotment Book.

The tithe records only include those who owned or leased land. Thus,spouses and children and those without land are not included. Over 2,500 parishes were surveyed between the years 1823 and 1837. The information contained in the books generally includes at least the name of occupier; the size of holding, the valuation and the tithe payable.The acreages given in the Tithe Applotment Books are in Irish or Plantation measure, which is 1.62 times larger than statute measure.The National Archives hold the original Tithe Applotment Books for the twenty-six counties of the Republic of Ireland

Lackagh Parish was divided in two by the River Clare. East of the River was Derrymacloughna Parish which was included in the union of Athenry whilst Lackagh was West of the river..

Tithe area names of Lackagh and Derrymacloughna civil parish and also landlord payees area can be viewed at the links below: