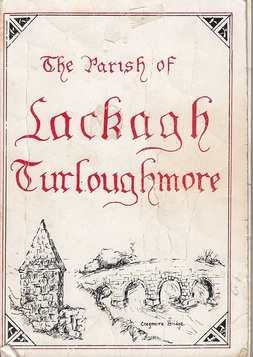 The parish of Lackagh, Turloughmore is a compilation of information collected by members of a local FÁS Teamwork Scheme, guided by Scheme Supervisor Marie Fahy, in association with the Parish History Committee.

The book, from which much of the material for this website is drawn, is an invaluable resource for those with an interest in the heritage of the Parish.

Containing almost 300 pages, it is a reference book covering topics ranging from our Parish history which goes back centuries,  our customs and pastimes to  our cultural, archaeological and  sporting heritage.

It features articles on the flood of 1924, the great famine, placenames, the fair of Turloughmore and the battle of Knockdoe. It also covers our National Schools and our church as well as the houses and estates of the landlords long since gone.

​The book is currently out of print. 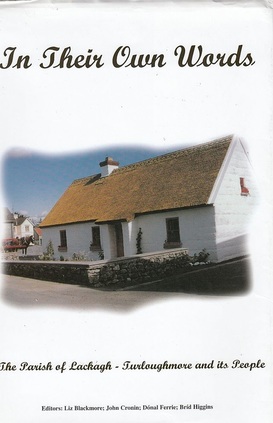 In Their Own Words-The Parish of Lackagh-Turloughmore and its People was published by Lackagh Museum Commitee in conjunction with FÁS and Turloughmore Heritage Project in 2001. The  project Co-ordinators was John Cronin and Brid Higgins whilst the book was edited by Liz Blackmore, John Cronin, Dónal Ferrie and Bríd Higgins.

The book aims to present an account of the history of the parish of Lackagh and Turloughmore, as seen through the eyes of the parishioners in the context of published literature.

Numerous  sources were researched. However, the primary source was oral history on the basis that "oral history provides information on aspects of life that in other circumstances can be difficult to access".

During the course of the research, 115 people from the locality gave interviews. The age profile of the group ranged from people in their thirties to people in their nineties.

Project participants called to the homes of the interviewees. The interviws were not focused but rather facilitated the interviewees to talk ad-lib about their lives and memories in their own words.

​The book is currently out of print.

To commemmorate the five-hundredeth anniversary of the battle of Knockdoe in 1504, Galway Historian and Author, William Henry was commissioned by Lackagh Museum Committee in 2004 to research and write the first defininitive book about the battle.

This book not alone covers the history of the battle but also the local folklore about it. The book also contains an account of the battle as contained in the Book of Howth.

Copies of William Henry's book can be purchased at Lackagh Museum for €10 or can be ordered from our online store.
Buy this book

Publications of local interest by Michael J. Hurley in association with Lackagh Museum

Michael John Hurley was born in Baldoyle County Dublin. He has harboured a lifelong interest in its local history and has published numerous books on various topics. He now lives in Lackagh and has already published three wonderful books of local interest since moving here;  Wild flowers in Lackagh, Wild birds in Lackagh and Street Furniture of the Lackagh Area.

A selection of other books published by Michael in association with Lackagh Museum...