The Great Famine in Lackagh

​​The  ten years  between 1841 and 1851 saw the population of the parish drop from 4,000 to 2,000, a massive 50% reduction, with Grange West suffering the greatest decline at 92½%. According to the church register, the birth rate had fallen to as few as ten in 1849 from a high of 126 in 1843. There is no evidence that vast numbers emigrated, either voluntarily or on paid passage by landlord clearances, so the presumption is that some 2,000 souls perished. This figure may in fact be understated as we do not have record of the number of men who came to work on the river drainage and stayed here with their families.

We can be certain that not one person was spared hardship at that time when contrary to traditional Irish hospitality, doors were kept shut and children not allowed our for fear of contracting the dreaded famine fevers. People did what they could for starving neighbours but had to put their own families first.

While the area around Turloughmore suffered some extremes of famine as was experienced in other parts of the county, it also witnessed a phenomenon in the influx of needy men to work on the aforementioned  canalisation of the Clare River. Hundreds of men walked many miles daily or weekly to avail of the meagre payment and provisions provided by the arduous ‘Famine relief works’ undertaken in the 1840 – 1850s.  The drainage scheme saw the course of the river altered into a canalised course from Corofin through the parish of Lackagh with some blasting and cutting of the limestone base, in places to a depth of forty feet – as great as any major canal or railway engineering undertaking nationally in the years following the Famine.

Interviews given to the Turloughmore Heritage Project gave the following information about living conditions in the area of the bridge of Turloughmore:  The river was made in 1845.  All the work was done manually.  I suppose they slept in a hayshed and at the weekend when they got the wages for the week which was 2 lbs (pounds or about .95 kg) of Indian Meal they headed for home to bring the meal to the family and many of them died from starvation on the way.

Families who had been evicted lived under the arches (of the bridge).[i]
I often heard my father say he saw people (living) in the arches between Murray’s and Fallon’s (Turloughmore).  He also said there was a shop in one of the arches.  They depended for dry cow-dung for fire and the smell was bad.[ii]

A vivid account of living conditions in Lackagh Parish is to be found in a letter dated 8th October 1846 which the Parish Priest John Burke wrote to Archbishop Murray of Dublin: My Lord—I beg most humbly and respectfully to appeal through you to the trustees of the Indian relief fund for charitable aid in behalf of the poorest and most distressed population of any locality in Ireland, of over four thousand souls who reside in this parish, containing an area of eleven or twelve thousand acres without gentry or one resident landlord, not a week’s provisions of sound potatoes could be had in any townland the parish. A great portion of people are poor cottiers trusting to a small quantity of land in which they sow potatoes alone; their failing for the two last seasons leaves themselves and families to absolute want of food and of all other necessaries of life.

I have sickness to a very great extent for the last two months, and many carried to an untimely grave for want of aid and proper attention, for we have not the advantage of medical aid or a fever hospital. I can instance a sad case of a poor family who through discreetness endeavoured to beat off the malady for some days, but to the great alarm of their poor neighbours both fell victims in the same night. God only knows what sad details of misery and woe I am obliged to hear and every day. I have at this moment over two hundred creatures confined to their miserable  cabins by diseaseand infirmities who have no source of relief whatever, save what I am through kind providence able to procure and hand them. In their name and behalf I implore the trustees (should there any funds at their disposal) to relieve the poorest and the most impoverished creatures [living] in any locality in Ireland.

In July 1848 the Parish Priest of Lackagh, Fr James Dwyer witnessed evicted people dying on the roadside, under bridges, and in sheds, and barns.  He frequently had to crawl on his knees into those ‘abodes of death’ to visit his parishioners before they succumbed to their fate.[iii] In fact a poor man named Hession left the Workhouse in Galway and was found dead in a hut near the bridge in Turloughmore in December 1846.[iv]  In May 1847 a crowd attacked a convoy of meal carts passing through Turloughmore and carried off several tons of the meal.[v]

​Rathfee suffered evictions on 14th April 1852 when eight families (35 persons) were dispossessed and their houses levelled by bailiffs.[vi]

The following report from 1872 shows that the people of Turloughmore were not as badly off as those in some parts of the country: Turloughmore, Galway, - The number of deaths is below the average.  The sanitary condition of this rural district is generally very good.  This is chiefly owing to compulsory sanitation, the lime washing of dwelling houses. &c. Besides, the peasantry are somewhat more comfortable and better clad now that they were hereto.[vii]

An entry in The Minute Book of the Guardians of the Galway Poor Law Union for 30th May 1881 also gives an insight into conditions around the Fair Green at Turloughmore:  From H M Close to Sanitary Sub Officer Cullinane saying he had no objection to have people removed from Arches at Turloughmore bridge, reported on as being unfit for human habitation and that he did not recognise them as tenants of his or Mrs Close.


[i] Turloughmore Heritage Project interview with Noel and Bridie Garrett of Lackaghmore. 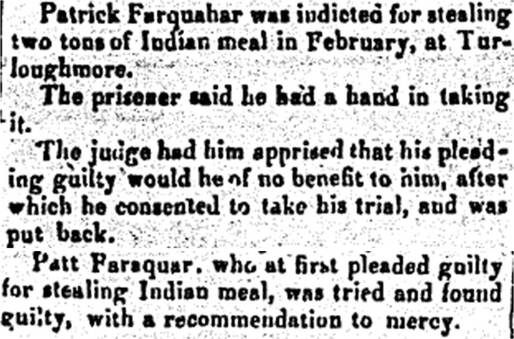 Extract from The Liverpool Mercury, 28th May, 1847 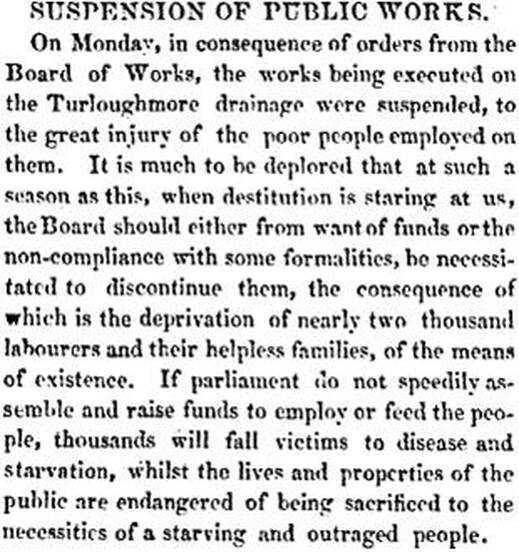 The digital resource UCC Famine Online   is a collaboration between the Geography Department in UCC and the Department of Culture, Heritage and the Gaeltacht. It is an invaluable source of public history for current and future generations as it contains detailed information charting changes in the social, political and economic landscape of pre and post Famine Ireland in each Parish in the country.