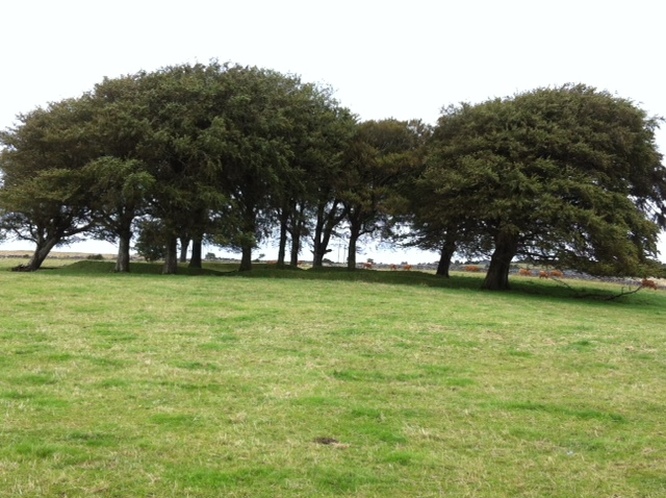 Ringfort at Knockdoemore
The archaeological sites dotted around our parish are the homes, work places and buriel grounds of our forefathers. They include ringforts, enclosures, moated sites, megalithic tombs, wells, cashels, lime kilns and numerous earthenworks sites.

Ringforts
These were enclosed circular areas where people lived and housed their farm animals.There are six of these sites in the parish.
1. Cahernashilleeny (2)
2. Carheenlea
3. Cloghaun
4. Grange
5. Knockdoemore

Enclosures
These are circular, rectangular, oval or irregular spaces defined by an earthen bank or stone wall that cannot be defined as ringforts. There are a number of such sites in the parish including:
1. Caherateemore North
2. Carheenlea
3. Caraun
4. Caraunkeelwy
5. Kiltrogue
6. Kilskeagh

Megalithic Tombs
One of these sites is located in a rectangular field in Carheenlea.

Wells
There are a number of wells around the parish including Monroe and Cregmore.

Earthenworks
These may be classified as either uncertain where they are no longer visible but marked on the OSI maps or as unclassified or where they were marked as antiquities on the first edition of the OSI maps.
1. Caherateemore North
2. Knockdoebeg West
3. Ballybrone
4. Cregmore
5. Derrymacloughna

Lime Kiln
There is a good example of a Lime Kiln in Carheenlea, on lands that were once part of the Meldon Estate.

Natural Hollow
Known locally as Pollnataibhse, it is close to the site of the Battle of Knockdoe.

Tumulus
This lies in flat farmland in Derrymacloughna.

Searching for sites and monuments records

The 1987 edition of the Sites and Monuments maps for Co Galway is held in map cabinets C2-C4 in the Hardiman Library in NUIG. The sites and monuments are numbered and encircled on the map (Revised edition 6” OS maps). An Index entitled Sites and Monuments record, Co. Galway: a list of archaeological locations in Co. Galway is shelved in General Reference at 936.174 SIT.

Details of the Sites and Monuments records for counties in the Irish Republic are available at the National Monuments Service website. There is an interactive map which enables one to get a list of all the recorded archaeolgical sites by townland.
Click to search tor recorded monuments by townland
Lackagh Museum