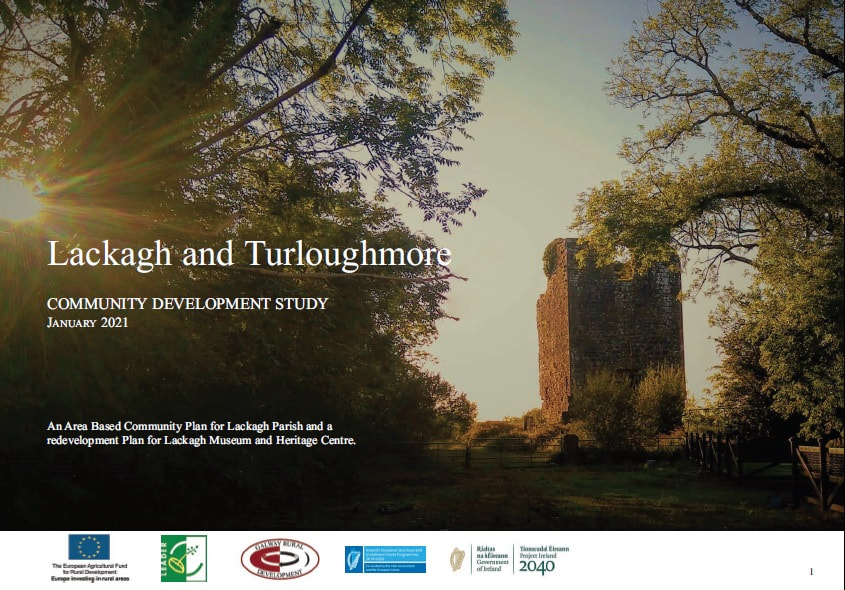 Lackagh Museum and Community Development Association in partnership with Turloughmore Community Council commissioned an area-based community plan for Lackagh parish along with a feasibilty study for the sustainable redevelopment of our Heritage Centre. The project aimed to determine what the community infrastructure deficits are in the parish while identifying which ones could potentially be incorporated into new developments at the museum.

The research was conducted by Alan Hill and John Ruddle. Alan is a sustainable development advisor based in Co. Leitrim with a background in the areas of tourism, community development and whilst John, a tourism development consultant worked for many years with Shannon Development.

The plan is now completed and over the coming years, we  hope to implement some of the actions identified in it that pertain to the museum. We would also like to help in any way we can to faciltate the community actions identified  and would  welcome people to make contact with us to explore ths further.

This project was part funded through Galway Rural Development (GRD) and the LEADER Programme.whilst Galway Co Co provided some financial support under the Community Support Scheme towards the printing costs,

The Lackagh Parish Community plan will be launched in line with Covid-19 guidelines on Saturday evening 24th July, 2021 in the New Parish centre (Carnoneen) following 7.30pm mass. Copies of the plan will be available on the evening whilst it will also be available for download on this webiste. 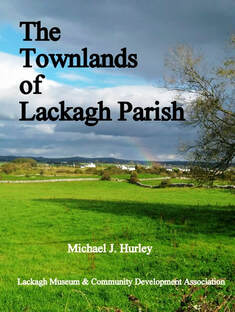 Radio and TV personality Jennifer Zamparelli has launched our latest book written by Michael Hurley, the story of the forty seven townlands that comprise the Civil Parish of Lackagh.

Whilst our townlands are the most basic unit of land division, the smallest classification of the civil distribution and the lowest in the hierarchy of settlement they nonetheless give us a sense of place.  Michael Hurley’s painstaking research on our parish townlands will undoubtedly help to reinforce this sense of place for the book is a detailed social history of the parish, townland by townland.

The book gives important facts concerning landlords, residents, and their families in years gone by. Much use has been made of local newspapers, and news items relating to each townland have been selected to reflect life in the area in the late nineteenth and twentieth centuries.

A particularly valuable inclusion is  the detail from the estate book of Joseph Meldon of Coolarne which provided us with detailed maps of five townlands and their residents at the late part of the 1800s. This fine tome was rescued from oblivion through the diligence of Museum Committee member Mary Duddy. It is through one of those idiosyncrasies of Irishness that Joseph Meldon’s house, Coolarne, was not in Coolarne at all, rather being in Carheenlea!

​The book is now sold out.

Civilian casualties of the War of Independence in Lackagh Parish 1920 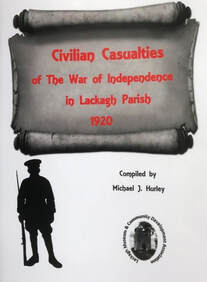 This year marks the centenary of a very turbulent period in the history of Ireland. The War of Independence, or Anglo Irish War, which ran from 1919 to 1921, wreaked havoc on many parishes in Ireland. It was a tense time particularly in Co. Galway where twenty-six people were killed by crown forces in the eight months between October 1920 and May 1921.

To commemorate the violent deaths of these local men, Lackagh Museum and Community Development Association published a booklet dedicated to the trio. Civilian casualties of the War of Independence in Lackagh Parish 1920 is compiled by our Association Secretary, Michael J. Hurley, his sixth printed publication featuring our local heritage as a member of our committee.

​The booklet is now on sale at a cost of €3 in local shops and from Lackagh Museum.
Order Online 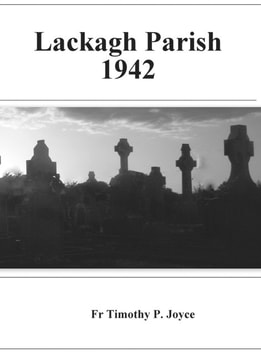 Lackagh Parish 1942, a booket written but never published by Carane native Fr. Tim Joyce who passed away in 1953 was launched as our contribution to Heritage Week following a commemorative Mass for the Joyce Family on Saturday 22nd August, 2020 in Lackagh Church.

The Booklet contains 40 pages and is black and white throughout including the cover. The original manuscript in "Roneo" type duplication was in safekeeping by Museum Committee member, Frank Kearney.

Thanks to Frank and  to Michael Hurley who diligently retyped and reformatted the copy, the Museum Committee is delighted to publish the booklet with the agreement of the Joyce family.

We also thank Galway Co Co for their assistance under the Community Support Scheme towards the printing costs.

The booklet is on sale at just €3 each  in Flynns of Lackagh, Fahys of Turloughmore and Loughnanes of Ballyglass and may also be ordered online.
Order Online 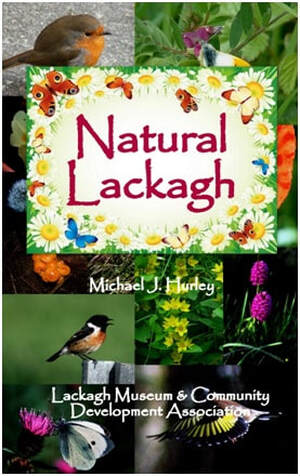 It details many species of birds, wildflowers, insects, butterflies, grasses, fungi, and trees with 400 full colour pictures and their common, colloquial, and botanical names. A feature of the book is the inclusion of the Irish version of the plant or creature name printed in green for ease of identification. It is not claimed to be a complete inventory of local flora and fauna, rather a broad introduction to the more commonly found species.

The book comes at a time when the entire world of wild life is under threat from global warming, change in land usage, and development. A study by the lecturers at Sydney University and The China Academy of Agricultural Sciences in Beijing show what they describe as a ‘catastrophic collapse of nature’s ecosystems’. The total mass of insects is falling by 2½ per cent annually which could show total extinction in a century. Since 1970 North America has lost some 2.9 billion (yes 2.9 thousand million!) from its bird population with 53% of grassland birds gone according to the Cornell Laboratory of Ornithology. Locally we are witnessing severe decline in for example the native Bumble Bee, Cowslip, and Curlew numbers; it is believed that the latter which was one of our most common moorland birds is now reduced to a total Irish population of around 138 birds. The once eel and salmon-rich Clare River now has a very small presence of fish life, and even the population of Crayfish here is under threat from an invasive plague.

It is hoped that this book will come as a reminder to local people, especially the young that the earth is fragile and it is in our hands to protect it. As a proverb from the North American Indians states ‘we do not inherit the land from our ancestors, we borrow it from our children’. How nice to be able to put a name to the various birds and plants that we encounter in our daily lives. Let us remember that their ancestors were living uninhibited hereabouts long before humankind laid claim to the hinterland of Turloughmore.

The book is compiled and written by Michael J. Hurley and is his fifth book on the Lackagh area since arriving here to live in 2014. Having a life-long interest in local history and the natural world he had previously published ten books on the area of Baldoyle and the Howth Peninsula in County Dublin.
​
The book is now sold out. 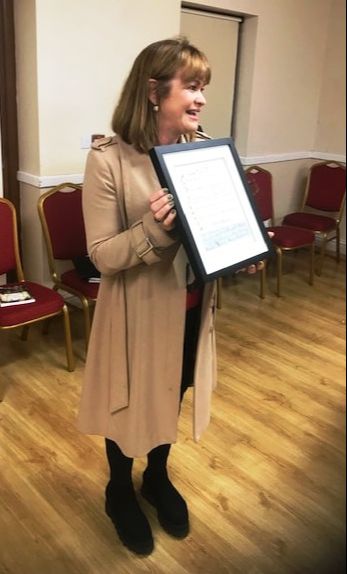 Terea Mannion proudly displays her Kearney family tree connection to Lackagh which was presented to her on the night. 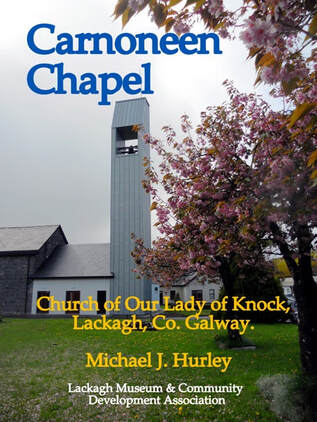 Parish priest of Lackagh, Fr. John O'Gorman started the evening with the celebration mass for former parish priest Fr. John D. Flannery's Diamond Jubilee. A huge turnout of parishioners joined us after mass for the launch.

Carnoneen is the old name for what we know today as Lackagh village and means ‘the cairn of the daisies’. The Carnoneen Chapel book has recorded the history of Lackagh - Coolarne Parish starting with Rev. Florence Kearney in 1419 through to the present year 2019, which is the 600th year of priestly ministry in the parish.

The full-colour book charts the history of the churches in Lackagh Parish along with the old graveyard (St Colmcille’s Church ruin), local lisheens, mass paths, and some churches in the neighbourhood.

Some 200 photographs, maps and illustrations enhance the publication which includes many pictures of local people at gatherings and events. We have been blessed to have Michael J. Hurley, a valued member of our community, who has documented the ecclesiastical history of our parish with this superb book.

We would like to thank everyone who assisted in the preparation of the book and for those that attended and helped on the night by making the launch such a huge success. It is truly wonderful to see the community come together. We are also extremely grateful to the financial support received from Galway Co Co's Community Support Scheme and the Galway Archaeological and Historical Society towards the publication of the book.

​The Carnoneen Chapel Book is available to purchase in Flynn's Super Valu, Lackagh and Fahy's Daybreak, Turloughmore. The proceeds of all sales of the book go toward the upkeep of Lackagh Museum & Heritage Centre.
Order Online 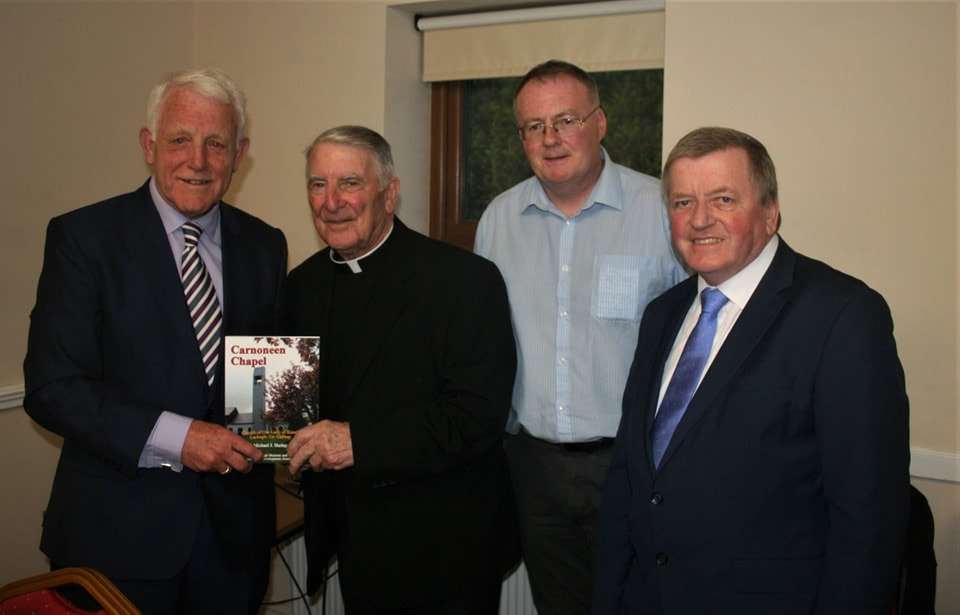 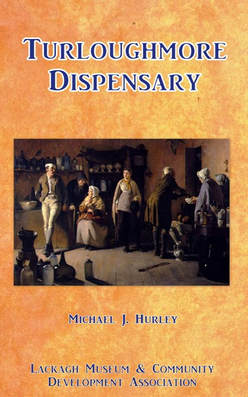 Chairperson Gerry McDonagh thanked the attendance and emphasised the importance of continuing the work of local history preservation in Lackagh Parish.

​The book was written by Michael J. Hurley and documents the development of the primary medical service in this area of Co. Galway. It tells the story of the health issues of the people and of the lives of the doctors and a Community Welfare Officer who served the people of Lackagh Parish since 1853.

Retailing at €8, the book is available at Flynn’s of Lackagh, Lackagh Post Office, Fahys of Turloughmore, and at Lackagh Cottage Museum. 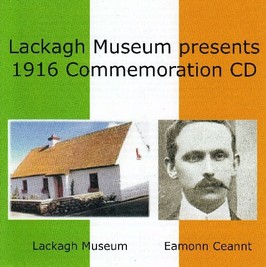